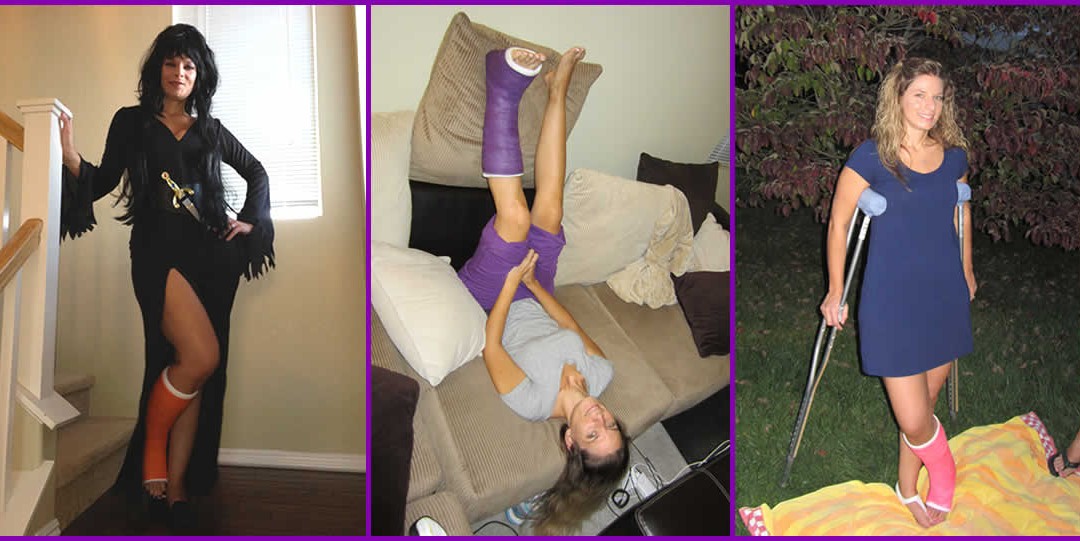 Lately, the pain in my feet has been getting worse and worse. Yes, my feet…again. (Begin rant…) It stinks. I haven’t been able to play sports or do any real exercising in a long time. I miss playing tennis, basketball, going for walks and runs, hiking, volleyball, bike riding and just being active. I even miss the elliptical machine. I got a set of golf clubs 2 years ago and I haven’t even had a chance to use them! NOT COOL! Celiac is ruining my feet and ankles! (…end rant)

I have multiple stress fractures, talar dome lesions, tendonitis, swelling and other medical terms for bad things going on in my feet, ankles and legs. My tendons, ligaments and bones have been ravaged by a lifetime of playing hard and an intolerance to wheat (Celiac). Over the past 5 years I’ve broken numerous bones. When I was pregnant, I was still recovering from a broken ankle (six months later) and it was slowly getting better, but it did not heal completely. I had to give up on it after a few months of pregnancy because I couldn’t crutch anymore due to my wrists breaking down. It’s very frustrating, and my right foot is in worse shape than my left. Over the weekend I had some issues with my right foot locking up again, and when it does, it’s like any move I make will break it. I have to carefully bend and move it around until it pops back into place, which is very painful.

Back in 2005 a doctor told me a steroid shot would fix my right foot, but all it did was make it worse. It caused me to be on crutches for a week; my foot was swollen, bruised and painful to walk on for a couple weeks afterward. I’m not sure what’s in those injections they give you, but my body had a bad reaction to that one. I’m also not a great reactor to surgery. In 2002 I had my tonsils removed – the healing with that took FOR-EV-ER. A week after I had them removed my mom raced me to the hospital at 4 a.m. I was back in surgery having the wounds burned closed because they starting bleeding and wouldn’t stop. The percocets they prescribed made me so sick I couldn’t keep anything down and the anesthesia wearing off made my whole body tingle and hum. After a few days of yakking, which doesn’t exactly tickle after a tonsillectomy, they gave me Tylenol with codeine which took the pain away without causing the sickness. I haven’t taken strong medication since, and the last couple times I had lidocaine and novocaine injections, my heart started beating super fast and my whole body started jumping and twitching in the chair. I’m trying to heal my foot myself, hopefully without surgery, unless it’s absolutely necessary or not major.

All the doctors I see want to shoot steroids in my feet or cut me open for surgery. My body is so malnourished from celiac disease, it takes me 2 to 3 times longer than a healthy person to heal. I’m of the belief that the body can mostly heal itself given the proper treatment and time. The problem I’ve had so far isn’t the proper treatment, it’s the time. I’m horrible at staying off my feet. I like to go-go-go and do-do-do. Being in a cast and staying off my foot works for about a month. I use crutches, and now have a great knee walker

to get around. They help so much, except for around the house, which is where most of my movement happens. I use the knee-walker if I’m going to be up a lot, but the up and down is more difficult because the latches aren’t exactly easy to get on and off. That’s where I really need to use the crutches. Being on crutches doesn’t bother me that much. It gives me a good workout and after a couple weeks my arms and shoulders look incredible! The only problem is that also after a couple weeks, my wrists start to break down, and within a month my joints hurt so bad, I can’t crutch or even hold myself up doing yoga poses. So I walk on it in the house, which ends up making it take longer to heal.

I’ve read in the next 10 – 15 years they might have a way to heal the bones naturally by injecting stem cells or some awesome crazy vitamin/mineral/antioxidant juice. Until then, it looks like I’ll be in and out of surgeries and in and out of casts. For now, I’m looking for someone who will fix both feet at the same time so I can heal all at once. I do not want pins drilled into my feet, from what I’ve read that only makes the situation worse. There has to be a better way… Do you have issues with your feet or ankles hurting or breaking often?